Last week, Midem director Alexandre Déniot and his team once again opened the door to the music business in the Palais des Festivals in Cannes. The weather gods were not always favourable to the French Riviera, but the enthusiasm, interest and commitment of the participants fortunately did not suffer from this.
On the contrary, now that the B2B music event is fully dedicated to emerging talent, interest in the MAA (Midem Artist Accelerator) has spiked at Midem Beach. The new meeting spot between the performances made the predominantly young concert crowd of up-and-coming professionals dream about a place in the MAA next year.
Midem also remains a place where hot issues from the sector are discussed. The Value Gap, for instance, was the subject of various debates, pleas and visions for the near future. The sector eagerly awaits the vote in the European Parliament at the end of June, which could set a worldwide precedent. 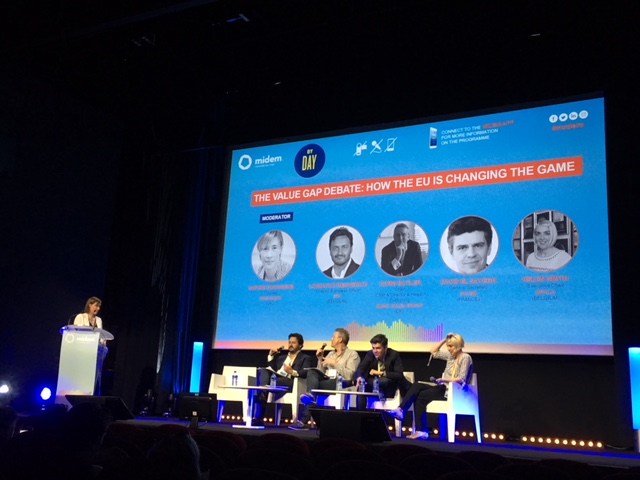 Seasoned participants continue planning this mythical music fair year-round, and even though the big rush may be a thing of the past, positive sounds can be heard from the new generation of first-timers. At our own stand, shared base camp of Sabam and Buma Cultuur, there was plenty of room for meeting and networking. We gathered some reactions from participants, sister associations and passers-by.

Daniël Verstappen (composer): As a cross-over pianist, composer and live artist, I came to Midem with different angles. The agenda of my manager and me was fully booked. I had meetings about SYNC, production, publishing, promo as well as collaborations with artists and producers.
We usually met at the Sabam/Buma pavilion. Compared to last year, we were much better prepared and were able to spend our precious time at Midem very productively. Although the number of participants has dropped considerably in recent years, this also had its advantages. You often encountered the same people so you could make closer professional contacts, discuss possible deals or collaborations…

It struck me that the age group 20-30 was strongly represented this year. For me, this was an excellent opportunity to exchange experiences with my peers and to brainstorm about the ever-growing digitisation in the new musical age. It was also very surprising that most fruitful meetings took place randomly, for instance at the airport, at the Sabam stand, during the evening programme at the Beach. This is what makes festivals and conferences such as Midem so interesting and ‘magic’. You can never know in advance whether that (un)planned meeting will take you one step further, but it is precisely this flexibility that makes it so unique.
Our agenda was packed, but we had to change it regularly, for instance to hold a very important two-hour meeting. I would like to elaborate on the deals we made, but they will soon be revealed… 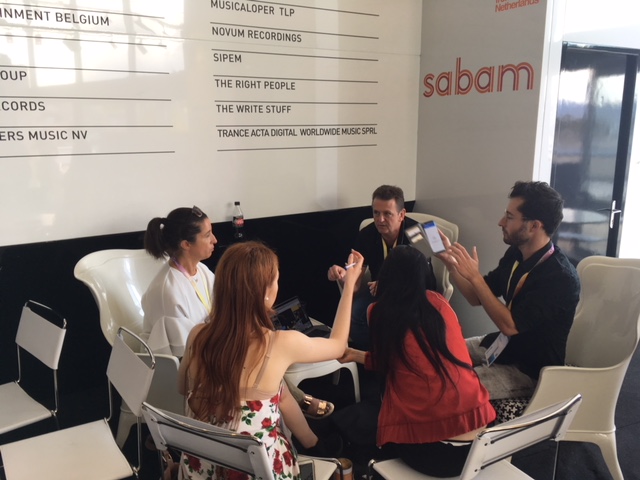 Marcel Kaufmann (Fondation Suisa): Midem 2018 was a mixture of sun and rain, not only as far as the weather on the Côte d’Azur is concerned. With a substantial increase of 9% in delegates’ numbers, according to the final Midem press release, the future of the trade fair in Cannes’ Palais des Festivals seems rather bright again. An actual experience of that increase was, however, not yet taking place this year. Midem clearly is struggling with some issues after moving from the winter into the summer season: The number of stands does not seem to grow along. June does not match with the agendas of many of the „old“ delegates. And the lovely summer temperatures make it more attractive to hang out in one of the cafes and bars along the Croisette than to spend the day inside. This also contributes to the „free-rider“ phenomenon: why buy a Midem registration when there are so many professionals accessible outside the Palais? And, of course, when the registration is still so bloody expensive!
Nevertheless, Midem has done its homework in the last couple of years: a new summery perspective to promote a new image, a change in management and a really cool showcase venue right next to the Palais are just some of the improvements that make me believe the curve is pointing upwards again. After all, the 35-strong Swiss delegation showed themselves quite happy with their meeting-partners and gained useful insights. So the quality seems to be there. And this does not only count for the publishers, the largest group represented and key account sector for SUISA and FONDATION SUISA. Especially for that sector, Midem is still one of the most important platforms in the world. So it is in fact here that we should be present and try to support them. And the fact that almost every Swiss delegate joins and uses the Swiss booth at Midem is the best testimonial of the added value we can provide with this engagement.
Midem is still facing some dark clouds, but it is the sunny side that prevails. And the forecast looks bright, too. So, at the time being, I would say: we’ll be back. 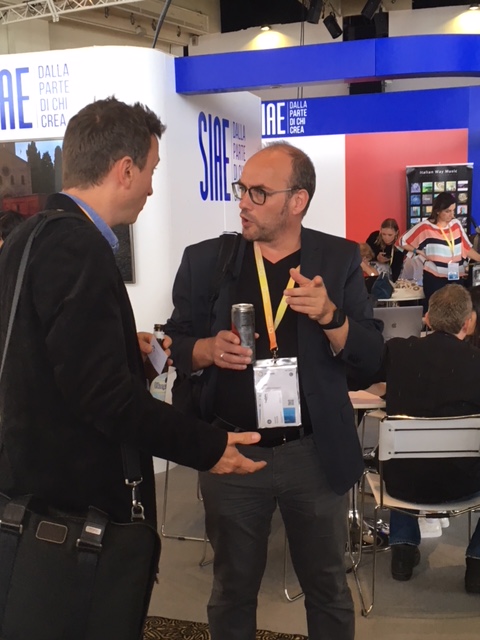 Stefaan Moriau (CTM Entertainment Belgium): Despite the smaller attendance, Midem remains an interesting event for publishers. We met with our existing international contacts as well as with new potential contacts. Once more, the Sabam stand in the Palais turned out to be a very useful and fun place for this. The location was ideal, with a terrace with tables overlooking the sea. The drinks at the end of each day provided for new networking opportunities. Also highly appreciated was the warm and expert welcome at the stand.

Silvan Harker aka Boris Bouillet (singer-songwriter from Grenoble): I am very happy to have attended Midem. I wasn’t expecting too much from it. There is always something going on, you meet a lot of people, there are lots of conferences and you can network extensively. The days are very long, but at the same time very short because time flies!
I am an author, composer and singer. I went to Midem to look for a label or a publisher, manager,… in short, a structure that helps me to launch my career and that allows me to focus on my artistic activities.

Thanks to Midem, I received more than 20 contract proposals, with organisations based around the world. I also met many artists with whom I can work together. So really, I found more than I was looking for. I met a young producer from Zurich, who wants to produce pop or electro melodies for artists. We talked a lot and plan to work together in the future.
I also got the chance to meet the manager of the oriental superstar Fairouz. He gave me a lot of clues about the digital distribution of my music and the strategies I had to apply in order to gain visibility quickly and efficiently with my own compositions.
Finally, during the conference of Scooter Braun - the manager of, among others, Kanye West, Justin Bieber and Ariana Grande - I learned a lot about how the music sector will evolve in 2018, which pitfalls I have to avoid and how I can surround myself well in order to protect myself emotionally.
I will definitely be back next year! I would even try to sign up for the Midem Artist Accelerator (MMA) so that I can be present on the live stages of Midem. If I am selected, this would be a huge opportunity to introduce more people to my music!

Wim Konings (B-Track Entertainment): For me, Midem was a success, as I closed an unexpected publishing deal. It was nice to meet strong people from the global music industry like Scooter Braun of SB Projects. There are indeed fewer exhibitors, but that makes Midem no less interesting. It is in fact easier to get meetings with people or music companies that are normally hard to get. Most participants are active in publishing and software or aggregators. However, there were remarkably many singer-songwriters present. Thanks to the people of Sabam and Buma. I will be back next year! 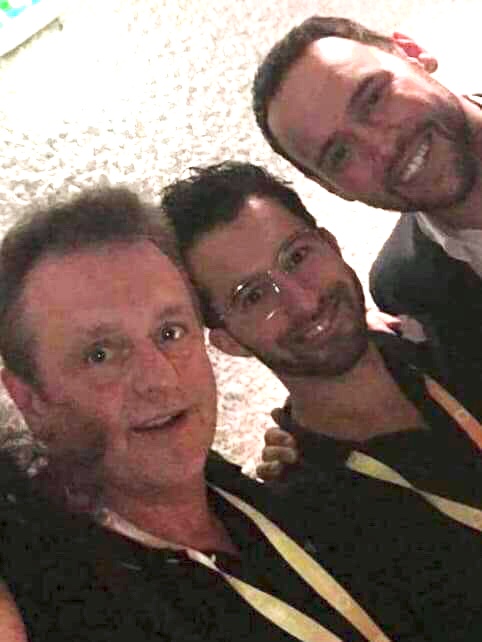 The world famous Scooter Braun (right) made time for a chat with our participants Wim Konings (left) and Daniël Verstappen (centre).

Eva Guerra (manager): I can describe our second attendance in two words: “instructive” and “fascinating”. We came here with concrete goals and a clear vision. Unexpected meetings took our path at Midem to a higher level. Attending the various panels was also very instructive to me. I can certainly get started with the provided advice. I had a lot of confidence in the stand of Sabam and Buma Cultuur. I could always schedule my appointments there.
Tania and Soraya were always there to answer my questions. Their hospitality gave me a feeling of coming home. The stand had a clear, sleek lay-out and it was reassuring that I could welcome my guests here. If the weather was nice, I could even offer them a drink on the terrace.
In short, being part of this has broadened my horizons and provided the opportunity to organise many interesting encounters. Thanks to all employees, top! 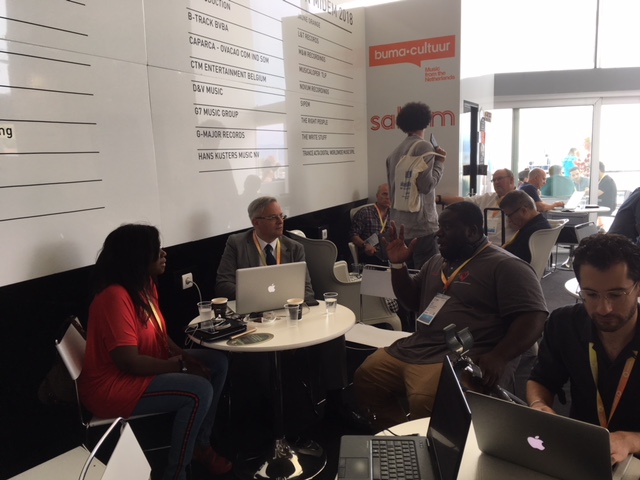 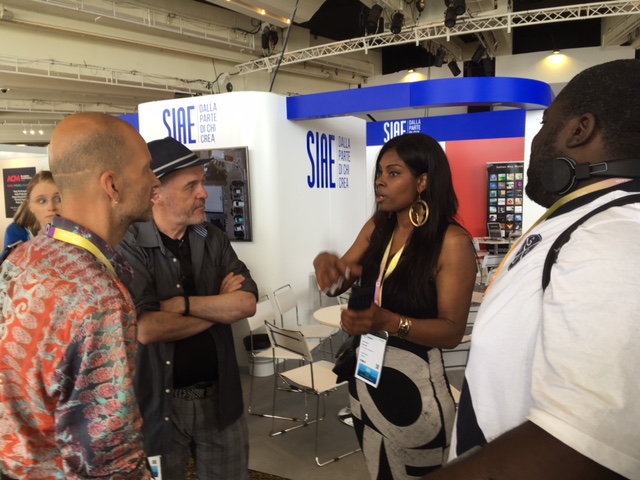 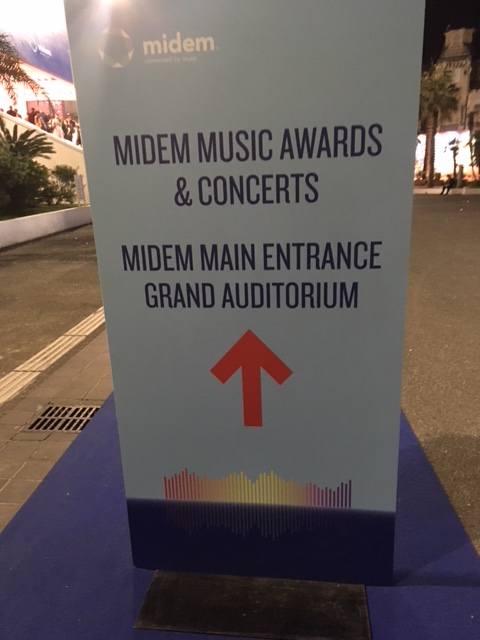 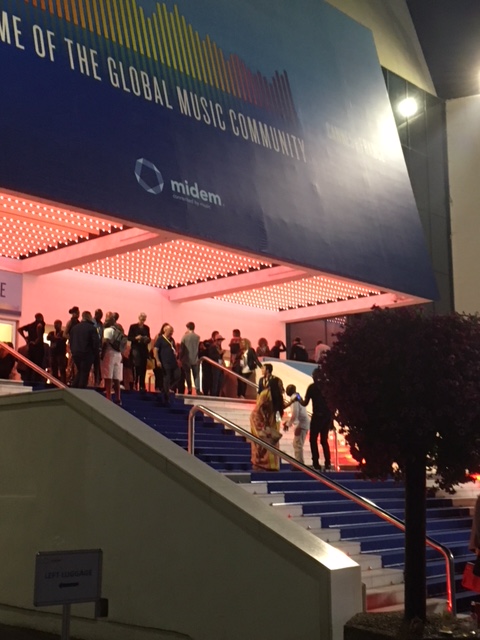 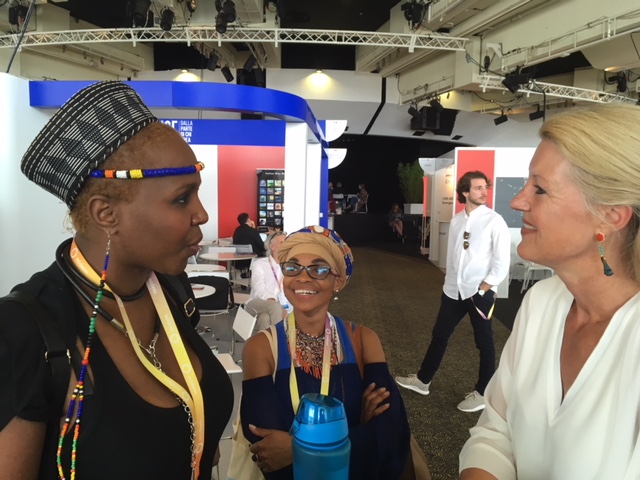 The young Melissa Joy Aimee (Joy Aimee Music-London) looks back with pleasure on her first Midem attendance. "The atmosphere was phenomenal. It was a warm, friendly place where so many people across the world could come together and connect over the common thread of music. I found the talks enjoyable and overall forward-thinking. It was inspiring to hear from those in the industry and at the forefront of innovation in the music world. I also had the chance to connect with a number of professionals for future collaborations that I would have never gotten the chance to meet otherwise. Midem gave me the chance to build my networks. By night Midem was also a delight with some great music from up and coming artists alongside further networking by the beach.
The stands were also super helpful and great at facilitating meetings. Tania of Sabam was a great help at making me feel welcome to the Belgian/Dutch stand, where I could mingle with numerous professionals. All in all, I gained a lot of insight into the different aspects of the music business and into how things work from country to country. For authors' societies, publishers, artists, writers and others, Midem is a perfect place to meet people, do business and build networks!"
(TG)