Robin: “I learned a lot by collaborating with musicians from various backgrounds.”

Sabam has a heart for jazz, as evidenced by its annually held Sabam Jazz Awards. On 5 July, the Minister for Culture Sven Gatz presented the awards during the Gent Jazz Festival. The award for Young Talent and the accompanying € 5.000 went to euphonium player Niels Van Heertum, whereas the award for Established Artist, together with a prize of € 10.000, went to saxophonist Robin Verheyen.

Virtuoso with an eye for many genres

Robin is rewarded by the jury for his artistic choices and versatility as a saxophonist. As a musician and composer, he has an impressive focus and unique personality. Furthermore, his success abroad has not gone unnoticed. Our editorial team asked for an initial response and further plans.

Robin: “It is great to be able to receive this prize in Belgium, surrounded by people who have supported me from the beginning. This Sabam Jazz Award is a nice reward for an international career that started here."
Robin has been a member of Sabam for 12 years now, a decade in which he says he grew enormously as a composer. Robin: "I have developed my personal style much more and I have learned a lot through collaborations with musicians from many different backgrounds".

Robin also translates this musical curiosity on stage this summer.
Robin: “As an Artist in Residence, I will be a guest at Jazz Middelheim with my quartet (together with Marc Copland, Drew Gress and Billy Hart; having recently released “When The Birds Leave” at Universal). The trio with Joey Baron and Bram de Looze and TaxiWars will also perform.
There are also plans for my project the Bach Riddles this year. There will be a new album with TaxiWars and a new CD and tour with Bram de Looze and Joey Baron.”

And as if that were not enough, there is also a new tour with Robins NY quartet and a new composition for the Goyvaert Trio in the pipeline.

Robin during the recording of the most recent quartet album 'When The Birds Leave' in New York, Systems 2 Studio, June 2016. (© John Rogers) 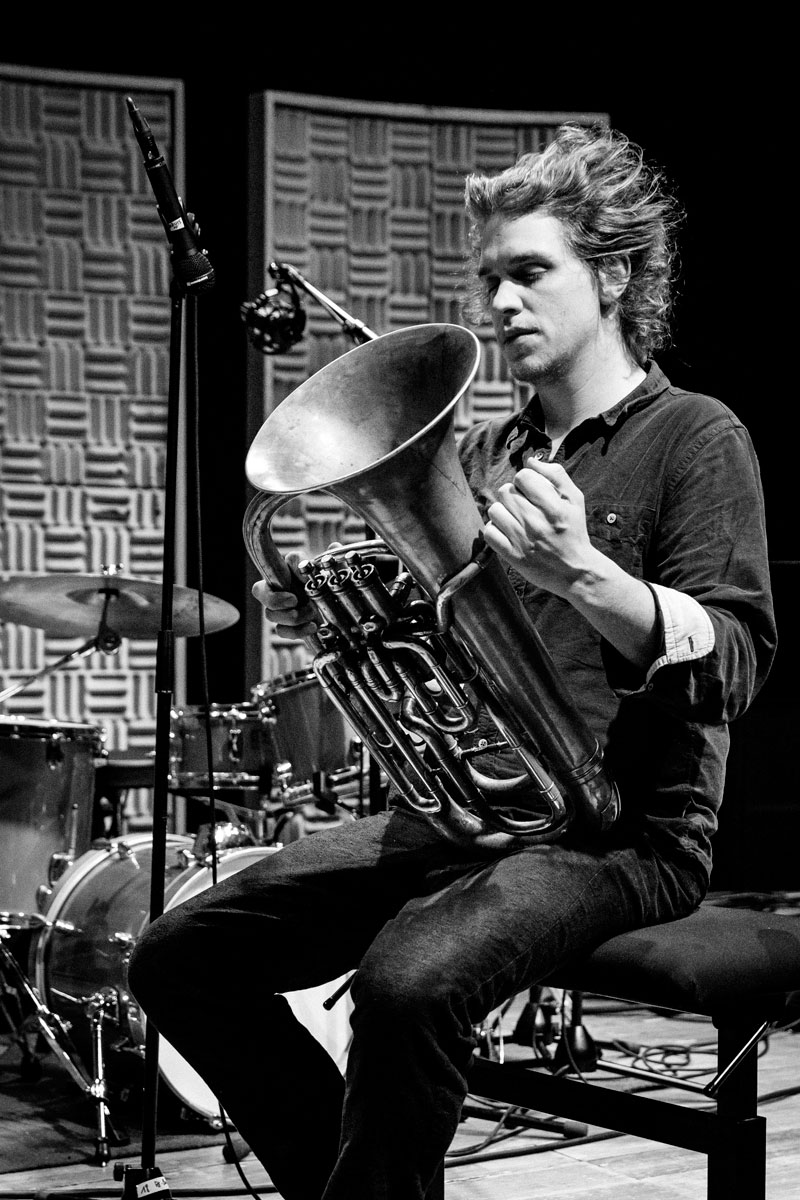 Niels Van Heertum is a young talent because of his ground-breaking attitude. The jury highlights Niels' pioneering work as a euphonium player, a lesser known instrument in jazz.

The winner himself emphasizes the diversity in jazz: “Jazz has so many faces. I myself have focused on free improvisation and mixed forms with other genres. I hardly ever play traditional jazz. I am glad that the jury appreciates such choices.”

This is the ninth edition of the Sabam Jazz Awards. They are awarded alternately in both communities of Belgium. The jury consisted of Pieter Koten, Roel Vanhoeck, Toon Van Deuren, Wim Wabbes and Mik Torfs. (TG) 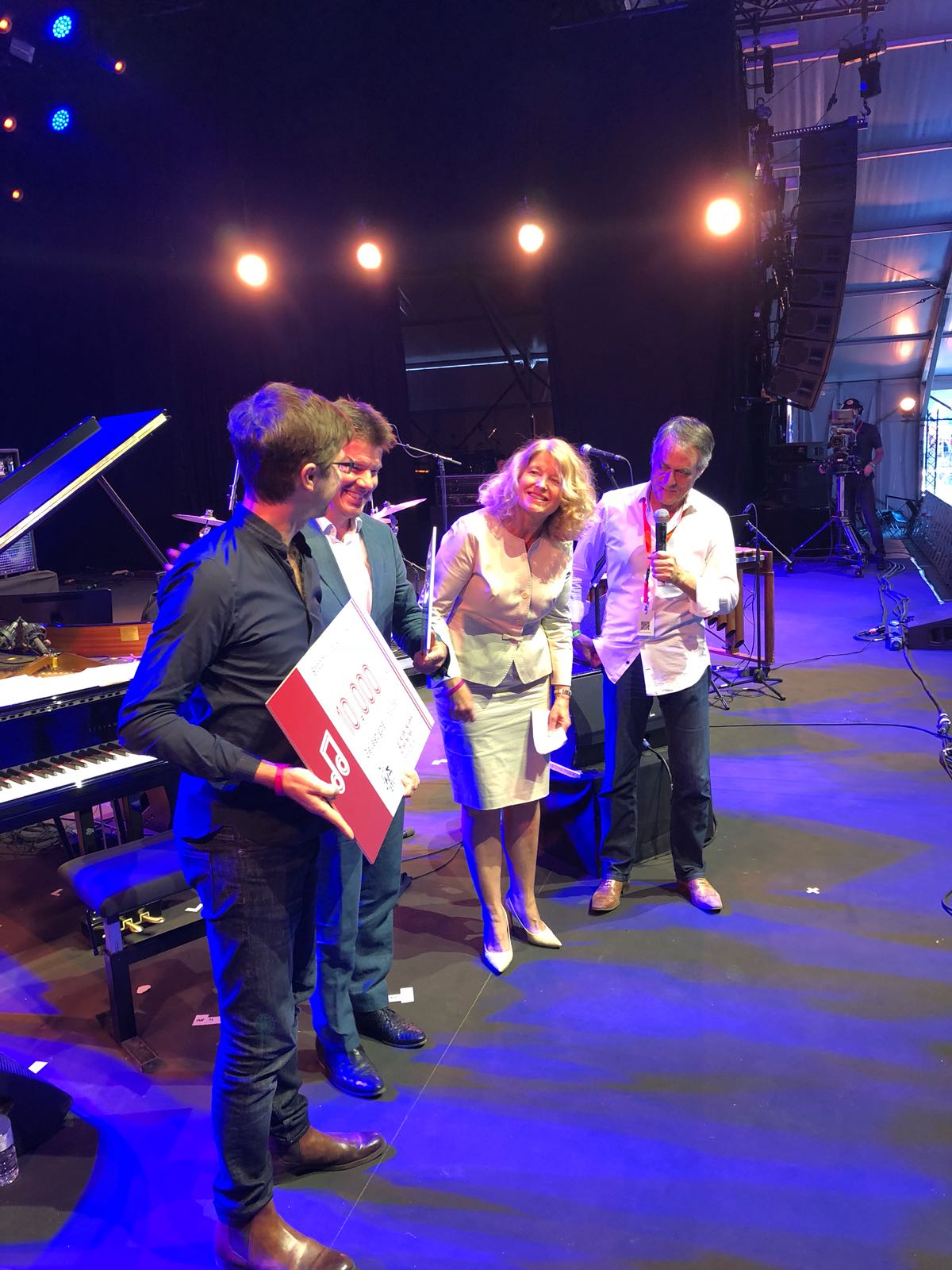 From the jury report:

Robin Verheyen
“Versatile talented saxophonist who asserts himself as an outstanding musician, producer and composer in jazz and classical music."

“Appreciation for the development of his international career, as evidenced by the release of his latest album on a major label.”

“Besides the many international projects, Robin Verheyen remains anchored in the national scene with his project TaxiWars and a sustainable collaboration with pianist Bram De Looze.”

"Robin always demonstrates an impressive focus and unique personality in his artistic choices.”

"Claims a place for the euphonium in the world of jazz, a lesser known instrument. Niels delivers pioneering work.”

“For several years, Niels has been paving a unique path, with great courage and in his own particular way, both as a composer and as a musician.”

“Appreciation for the broad career of this musician, who is active in various projects within different disciplines.”

The Sabam Jazz Awards were first presented in 2010. These awards are given to jazz musicians who distinguish themselves from their contemporaries based on career and achievements within the genre. The awards are the successors to the former Django D’Or. In addition to an official recognition, Sabam actively wants to contribute to the career of jazz musicians. This way, the cash prize is used, among other things, for the purchase of instruments, studio time or workshops.

Gent Jazz Festival started 17 years ago in the Ghent Gravensteen castle under the name Blue Note Records Festival. Since then, this small rebel in the Flemish festival landscape turned into an annual multi-day party that surprises jazz lovers and delights newcomers. The 17th edition of Gent Jazz Festival takes place from 29 June to 8 July on the magical Bijloke site in Ghent. Big names such as David Byrne (former Talking Heads), Melanie De Biasio, Tom Jones, super group Hudson with, among others, Jack DeJohnette and John Scofield, Chico Freeman, Paolo Conte, Kandace Springs, Pharoah Sanders, The Roots and Selah Sue have already confirmed their presence. The 2019 edition will take place from 11 to 21 July.