Directors and screenwriters argue in favour of a quick solution in the European Copyright Directive
July 20, 2018

The film industry is also striving for a fast solution for better online protection of its authors in Europe. FERA (Federation of European Film Directors), FSE (Federation of Screenwriters in Europe) and SAA (Society of Audiovisual Authors) thank their supporters for the support of the past few months, but emphasise that the fight is not yet over, on the contrary.

The three interest groups recently joined forces to call on screenwriters and directors:

“Thank you for signing the petition. A month ago, we wrote to all signatories to share the happy news: Members of the Legal Affairs’ Committee of the European Parliament adopted their report on the proposal for a new Directive on Copyright in the Digital Single Market on 20 June. We welcomed the inclusion of a new provision in favour of fair and proportionate remuneration for authors and performers for the exploitation of their works.
Unfortunately, the mandate given to the Legal Affairs’ Committee to start the negotiations with the EU Council and the European Commission was challenged and the report will now be discussed by the full house of the European Parliament on 12 September, which delays the adoption of the position of the Parliament. (To learn more about what happened please read our blog www.saa-authors.eu/en/blog)
For screenwriters and directors, it is important that the European Parliament adopts a position that confirms their right to fair and proportionate remuneration for the exploitation of their works. We therefore continue to need your support to show the European Parliament that we are numerous calling for improving the situation of screenwriters and directors. Help us to reach 20,000 signatures!” 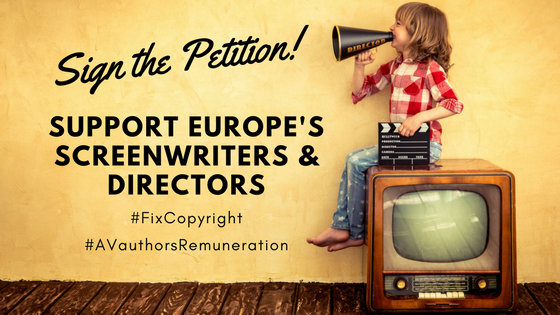